2023 will be the eighth year that the tournament will be played on a clay court surface.  This year all the main draw matches will be on hydrocourts.

In 2023 we will welcome back sponsors and fans to the tournament site.  In addition, Live Web-Streaming of the 2023 Tallahassee Challenger matches will again be available. This means tennis fans all over the world will be able to watch their favorite players’ matches live from their computers, mobile phones, iPads, etc.  All for free!

The Tallahassee Tennis Challenger Presented by Visit Tallahassee partners with the City of Tallahassee Parks, Recreation and Neighborhood Affairs and Tallahassee Memorial HealthCare Foundation, the United States Tennis Association and the Association of Tennis Professionals in order to bring the tournament to you. 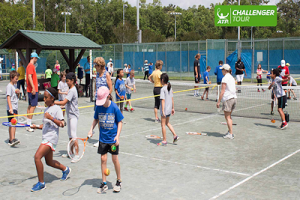 Proceeds from the tournament continue to benefit the Vogter Neuro-ICU.  In 2019 the new state of the art Vogter Neuro Intensive Care Unit opened in the Mustian Surgery Center of Tallahassee Memorial HealthCare. This unit cares for patients of all ages who suffer neurological trauma (such as head injuries, strokes), require surgical intervention for life-threatening illnesses (brain tumors, aneurysms), and many other types of patients too numerous to name. Over the past 24 years funds have been contributed from the tournament and last year the D. Mark Vogter Memorial Endowment reached $1,100,000 in the corpus of the endowment.  This is an accomplishment for which we are all very proud.

A new fund was created in 2010—the Maria Yealdhall Challenger Tennis Fund was established with the Tallahassee Friends of Our Parks Foundation, the fund-raising arm of the Parks, Recreation and Neighborhood Affairs Department.  All monies collected from ticket sales are donated to this endowment each year and are used to assist in tennis related projects and programs throughout the city.  Shade structures at Winthrop Park and at Tom Brown Park as well as an several awnings at Forestmeadows are some of the improvements made with these funds. 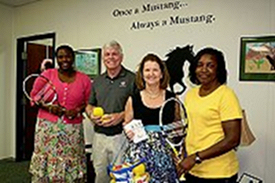 A tournament of this size could not happen without committed volunteers who work every year. From ball kids/babes & dudes, who stand on the court for hours, to the food-Moms and hostesses, drivers, desk volunteers and organizers, thousands of hours are donated to make this tournament run smoothly. And we are always looking for a few more!! If you are interested in becoming a volunteer before, during or immediately following the tournament please contact Karen Vogter, Tournament Director, at KVogter@tallahasseechallenger.com